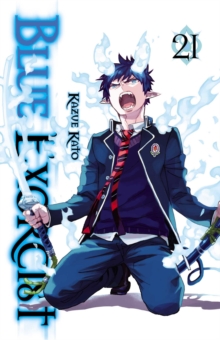 Part of the Blue Exorcist series

Rin and his exorcist classmates are caught in a secret war against the forces of darkness. Raised by Father Fujimoto, a famous exorcist, Rin Okumura never knew his real father.

One day a fateful argument with Father Fujimoto forces Rin to face a terrible truth - the blood of the demon lord Satan runs in Rin's veins!

Rin swears to defeat Satan, but doing that means entering the mysterious True Cross Academy and becoming an exorcist himself. An attack on Tokyo by a huge demon that is visible to almost everyone marks the start of an unprecedented outbreak of demonic activity around the world.

Now Yukio rushes to confront Mephisto, determined to hear the truth of the circumstances of his and Rin's birth.

Yet Mephisto, aloof as always, still seems to be pulling everyone's strings.

For Yukio and Rin, there will be no easy answers...