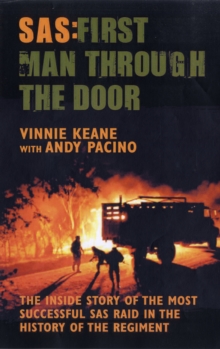 SAS - first man through the door : the inside story of the most successful SAS raid in the history of the regiment

By 2000, civil war had been raging in the tiny diamond-rich country of Sierra Leone for ten years.

The people there had endured unimaginable violence and were at the mercy of the uncontrollable rebel force, the Revolutionary United Front (RUF).

During this reign of terror, a splinter group calling themselves the West Side Boys formed.

They modelled themselves on American rap stars and lived their lives through gun-law, violence and terror.

They recruited teenagers and child soldiers, many of whom were forced by their elder 'officers' to rape and murder members of their own families in order to traumatise them into fighting for the rebel cause.In August 2000, the West Side Boys kidnapped and tortured eleven Royal Irish Rangers who were members of a UN Peacekeeping Force.

The British Government ordered a Special Forces attack on the rebel base camp with the specific intention of giving the West Side Boys 'a bloody nose'.

There could be only one outcome: the annihilation of the West Side Boys.

Days later, the SAS stormed the jungle camp and after rescuing the hostages they went on to obliterate almost the entire rebel force, bringing to an end the decade-long civil war. "SAS: First Man Through the Door" is the only first-hand account of this daring mission.