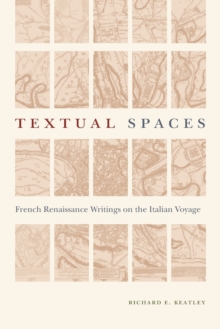 This study digs beneath the facade of leisurely travel literature to unearth a complex web of rhetorical, sociological, and political values that conditioned and informed the experiences of French travelers in Italy. Utilizing period maps and geographical sources, Keatley combines rigorous philological mapping of travelers' itineraries with creative analyses of the tensions that undergird the rewriting of space.

In his readings, Keatley traces how the creation of these "textual spaces" allowed travelers to transform territories lost to France through warfare into spaces of desire, forming what Pierre Bourdieu calls symbolic capital, which was used in an ongoing commerce within the French political landscape. By highlighting the political and militaristic origins of leisure excursions, Textual Spaces contributes to our understanding of travel's dual nature and invites the modern reader to examine the exploitative origins of tourism.

Linking the fields of literary and cultural studies, history and art history, and spatial and landscape theory, it provides an engaging vision into the early history of travel that will interest historians, literary scholars, and anyone keen to understand why we venture abroad.