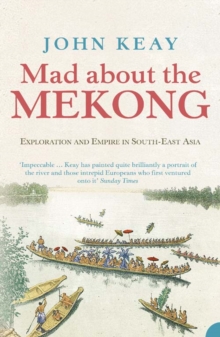 Mad about the Mekong : exploration and empire in South-East Asia

HarperPerennial
0007111150 / 9780007111152
Paperback
915.9'7'0444
19/06/2006
Usually dispatched within 4 weeks
United Kingdom
20 cm 352 p. : ill. (chiefly col.)
general  Learn More
Reprint. Originally published: London: HarperCollins, 2005.
The story of both a dramatic journey retracing the historic voyage of France's greatest 19th-century explorer up the mysterious Mekong river, and a portrait of the river and its peoples today. / 'Mad About The Mekong' is travel and historical narrative by a superb writer-historian. / Keay is the author of highly-praised histories such as 'The Honourable Company: A History of the English East India Company' and 'India: A History'. / The book's subject, Francis Garnier, made a number of discoveries that filled a geographical void and determined the course of French colonial expansion into Indo-C

This is the story of both a dramatic journey retracing the historic voyage of France's greatest 19th-century explorer up the mysterious Mekong river, and a portrait of the river and its peoples today.

Any notion of sailing up the Mekong in homage to Francis Garnier has been unthinkable until now.

From its delta in Vietnam up through Cambodia, Laos, Thailand, Burma and on into China, the Mekong has been a no-go river, its turbulent waters fouled by ideological barriers as formidable as its natural obstacles.

But recently the political obstacles have begun to be dismantled - river traffic is reviving.

John Keay describes the world of the Mekong as it is today, rehabilitating a traumatised geography while recreating the thrilling and historic voyage of Garnier in 1866.

The French expedition was intended to investigate the 'back door' into China by outflanking the British and American conduits of commerce at Hong Kong and Shanghai.

The two-year expedition's failures and successes, and the tragedy and acrimony that marked it, make riveting reading.