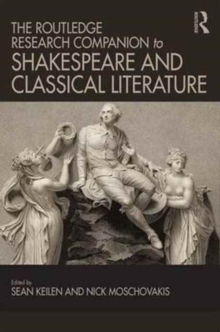 The Routledge research companion to Shakespeare and classical literature

By: Keilen, Sean (University of California, Santa Cruz, USA)(Edited by),  Moschovakis, Nick(Edited by)

In this wide-ranging and ambitiously conceived Research Companion, contributors explore Shakespeare's relationship to the classic in two broad senses.

The essays analyze Shakespeare's specific debts to classical works and weigh his classicism's likeness and unlikeness to that of others in his time; they also evaluate the effects of that classical influence to assess the extent to which it is connected with whatever qualities still make Shakespeare, himself, a classic (arguably the classic) of modern world literature and drama.

The first sense of the classic which the volume addresses is the classical culture of Latin and Greek reading, translation, and imitation.

Education in the canon of pagan classics bound Shakespeare together with other writers in what was the dominant tradition of English and European poetry and drama, up through the nineteenth and even well into the twentieth century.

Second-and no less central-is the idea of classics as such, that of books whose perceived value, exceeding that of most in their era, justifies their protection against historical and cultural change.

The volume's organizing insight is that as Shakespeare was made a classic in this second, antiquarian sense, his work's reception has more and more come to resemble that of classics in the first sense-of ancient texts subject to labored critical study by masses of professional interpreters who are needed to mediate their meaning, simply because of the texts' growing remoteness from ordinary life, language, and consciousness.

The volume presents overviews and argumentative essays about the presence of Latin and Greek literature in Shakespeare's writing.

They coexist in the volume with thought pieces on the uses of the classical as a historical and pedagogical category, and with practical essays on the place of ancient classics in today's Shakespearean classrooms.