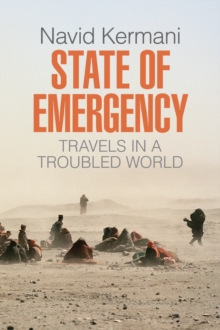 State of emergency : travels in a troubled world

By: Kermani, Navid,  Crawford, Tony(Translated by)

This book ventures into the world beyond Lampedusa: the crisis belt that stretches from Kashmir across Pakistan and Afghanistan to the Arab world and beyond, to the borders and coasts of Europe.

Celebrated author Navid Kermani reports from a region which is our immediate neighbour, despite all too often being depicted as remote and distant from our daily concerns.

Kermani has visited the places where no CNN transmitter truck is parked and yet smouldering fires threaten world peace.

In his widely praised, wonderfully agile and careful prose, he reports on NATO's war in Afghanistan and the underside of globalization in India, on the civil war in Syria and the struggle of Shiites and Kurds against the 'Islamic State' in Iraq.

He was the only Western reporter present at the suppression of the mass protests in Tehran, travelled with Sufis through Pakistan, talked with Grand Ayatollah Sistani in Najaf, and observed the disastrous Mediterranean refugee route in Lampedusa.

Kermani's gripping reports allow us to understand a world in turmoil, to share the suspense and the suffering of the people in it.

As if by magic, he brings individual lives and situations to life so vividly that complex and seemingly distant problems of world politics suddenly appear crystal clear.

Our world too lies beyond Lampedusa.