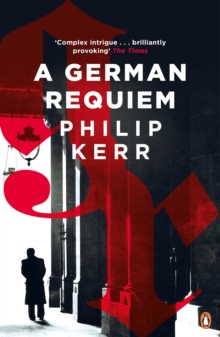 The third in the late Philip Kerr's universally acclaimed Berlin Noir trilogy, A German Requiem sees detective Bernie Gunther enter the new and terrifying world of post-war Vienna. In the bitter winter of 1947 the Russian Zone is closing ever more tightly around Berlin.

So when an enigmatic Russian colonel asks Bernie Gunther to go to Vienna, where his ex-Kripo colleague Emil Becker faces a murder charge, Bernie doesn't hesitate for long.

Despite Becker's unsavoury past, Gunther is convinced that shooting an American Nazi-hunter is one crime he didn't commit. But Vienna is not the peaceful haven Bernie expects it to be.

Communism is the new enemy, and with the Nuremberg trials over, some strange alliances are being forged against the Red Menace - alignments that make many wartime atrocities look lily-white by comparison. Vividly evoking the atmosphere of postwar Vienna, A Germen Requiem brings all Philip Kerr's pace and mordant wit to the tangle of guilt, suspicion, and double-dealing that laid the foundations for the Cold War. 'For Christmas, I would like all of Philip Kerr's Berlin Noir novels' Sam Mendes, Guardian'Philip Kerr is the contemporary master of the morally complex thriller' New York Observer