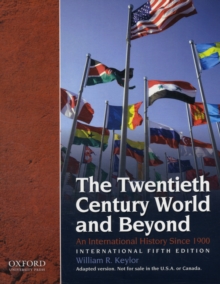 The twentieth century world and beyond : an international history since 1900

By: Keylor, William I.

The Twentieth-Century World and Beyond: An International History Since 1900, International Fifth Edition, explores the history of modern relations between the U.S., Europe, Africa, Asia, Latin America, and the Middle East.

The book's unique analytical framework-which focuses on the relationships between these countries rather than on their individual histories-helps readers to easily examine how the nations of the world have interacted since the beginning of thelast century.

Extensively revised in this international fifth edition, The Twentieth-Century World and Beyond reflects the latest scholarship and also features photographs for the first time-more than fifty throughout the text.

The new edition addresses such issues as refugees and stateless persons,human rights, the environment, and the events of September 11, 2001.

Updated to include the war on terrorism, military action in Iraq, and the causes and consequences of globalization, this edition also explores the expanding role of nongovernmental organizations, the threat of AIDS to world order, narcotics trafficking, and environmental degradation.