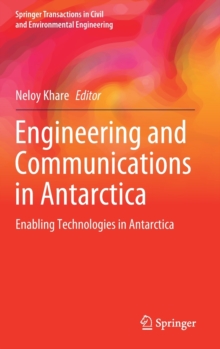 Part of the Springer Transactions in Civil and Environmental Engineering series

India launched its maiden scientific expedition to Antarctica way back in 1981 and ever since annual expeditions are launched to address thematic research in the contemporary areas of Antarctic Science and Engineering.

The initial efforts and achievements of India are not only significant but are of historical importance. This book discusses a wide array of topics that have entered the mainstream of geotechnical and geo environmental engineering over the initial two and half decades of India's presence in the icy continent 'Antarctica'.

At the same time, it highlights the lessons learnt in cryo-engineering technologies.

It covers various articles on many aspects of environmental science and collates the overall achievements in the fascinating field of Antarctic engineering and environmental impact assessment.

Accordingly, this book covers articles on wind energy by Ramesh et al., and engineering aspects in Antarctica by Rai.

Similarly, Pathak has reviewed the engineering details of Dakshin Gangotri and Maitri.

On the contrary, Sharma has provided an interesting history about the process of establishment of Dakshin Gangotri station.

Similarly, communication aspects have been highlighted by Dhaka.

Commercial polymers and their utility in cold region have been discussed by Dabholker et al. Besides, Tiwari and Khare have reviewed the environmental studies carried out during the initial 25 years in Antarctic research base 'Maitri'.

On the other hand, Veerbhadraiah and Jain have provided a status on environmental management services at Maitri station Additionally Tiwari has provided details on the new Indian Research Base 'Bharti' at Larsemann Hills region.

It provides a one-stop reference for researchers and those working in industry and government.