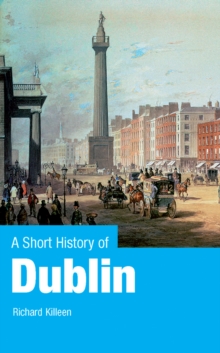 A short history of Dublin

Dublin started as a Viking trading settlement in the middle of the tenth century.

Location was the key as it commanded the shortest crossing to a major port in Britain.

By the time the Normans arrived in Ireland in the twelfth century, this was crucial: Dublin maintained the best communications between the English crown and its new lordship in Ireland. The city first developed on the rising ground south of the river where Christ Church now is and the English established their principal citadel, Dublin Castle, in this area.

Throughout the medieval and early modern periods, the city's importance was entirely ecclesiastical and strategic.

It was not a centre of learning, or fashion or commerce. The foundation of Trinity College in 1592 was a landmark event but the city did not really develop until the long peace of the eighteenth century.

Then the series of fine, wide Georgian streets and noble public buildings that are Dublin's greatest boast were built.

A semi-autonomous parliament of the Anglo-Irish elite provided a focus for social life and the city flourished. The Act of Union of 1800 saw Ireland become a full part of the metropolitan British state, a situation not reversed until 1922.

The city missed out on the Industrial Revolution. By the time Joyce immortalised it, it had become 'the centre of paralysis' in his famous phrase. Independence restored some of its natural function but there was still much poverty and shabbiness.

The 1960s boom proved to be a false dawn. Only since the 1990s has there been real evidence of a city reinventing and revitalising itself.