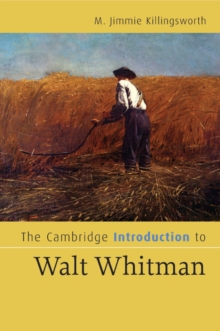 The Cambridge introduction to Walt Whitman

Walt Whitman is one of the most innovative and influential American poets of the nineteenth century.

Focusing on his masterpiece Leaves of Grass, this book provides a foundation for the study of Whitman as an experimental poet, a radical democrat, and a historical personality in the era of the American Civil War, the growth of the great cities, and the westward expansion of the United States.

Always a controversial and important figure, Whitman continues to attract the admiration of poets, artists, critics, political activists, and readers around the world.

Those studying his work for the first time will find this an invaluable book.

Alongside close readings of the major texts, chapters on Whitman's biography, the history and culture of his time, and the critical reception of his work provide a comprehensive understanding of Whitman and of how he has become such a central figure in the American literary canon.