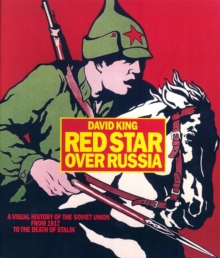 Red star over Russia : a visual history of the Soviet Union from 1917 to the death of Stalin

Through an amazing array of posters, photographs, paintings, magazines, book jackets, advertisements, pamphlets and other rare ephemera, "Red Star Over Russia" tells the story of the Soviet Union, from the Russian Revolution to the death of Stalin.

For countless millions, revolutionary dreams were transformed into unspeakable tragedy.

Yet it was also a time of intense creativity, in which the hopes, aspirations and revolutionary fervour of a people were captured in an extraordinary outpouring of visual material.

Universally acclaimed on its publication in 2009, David King's masterful book is the fruit of over 40 years of research.

In it, he rescues many of the unsung heroes of the epic struggles that shaped the Soviet Union from obscurity and commemorates the talent of some of the most brilliant artists, photographers and designers of the twentieth century.