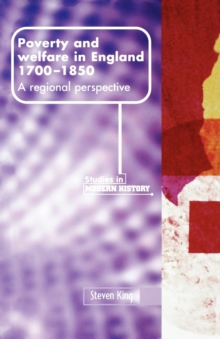 Part of the Manchester Studies in Modern History series

An overview of the literature on poverty, and of the welfare policies of the state, as well as the alternative welfare strategies of the poor for the period 1700 to 1850.

Drawing on well-known contributions to the welfare debate, Steven King offers his perspective on how we should conceptualize poverty and how ordinary families and communities responded to that poverty.

The book first details the legal framework which shaped the treatment of a poverty problem, before moving on to consider the historiography of poverty and welfare.

A variety of primary source material is used to reconsider the extent of poverty in the period 1700 to 1850.

The second half explores the ways in which communities, families and individuals responded to poverty, tracing the very different experiences of several regional units and using primary material to reinterpret the subject.