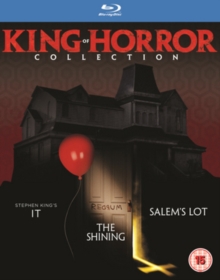 Collection of three horrors based on novels by Stephen King. 'It' (1990) follows a group of seven childhood friends, known as The Losers Club, who reunite to combat a mysterious threat which they had thought was long since buried.

Lurking in the shadows, and preying on their innermost fears, a shape-shifting, supernatural predator, manifesting as a killer clown called Pennywise (Tim Curry), prepares to strike again.

In 'The Shining' (1980) Jack Torrance (Jack Nicholson) seeks solitude in order to write a novel and takes a job as an off-season caretaker at the remote Overlook Hotel in Colorado.

Eager to get started, Jack disregards warnings that the isolation drove a former caretaker mad, and moves into the massive resort with his wife Wendy (Shelley Duvall) and son Danny (Danny Lloyd).

But Danny has a supernatural gift which makes him aware of an evil lurking in the hotel, and as winter storms cut the hotel off from civilisation, Jack gradually becomes murderously insane.

Finally in 'Salem's Lot' (1979), novelist Ben Mears (David Soul) returns to his childhood town of Salem's Lot, Maine, unaware that an ancient evil has been unleashed there.

Sinister goings-on lead Ben to believe that the answer lies with new arrival Mr Straker (James Mason), but when he begins scratching below the surface he is shocked to discover rampant vampirism in the town.