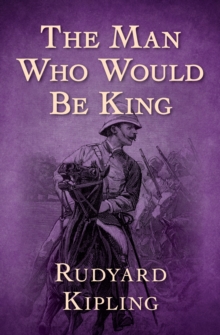 M. Barrie called ';the most audacious thing in fiction.' While on tour in India, a British journalist encounters Daniel Dravot and Peachey Carnehan, two foolhardy drifters with a plan.

Claiming they've exhausted all the schemes and odd jobs they could find in India, the two are in search of an even greater adventure.

They tell the journalist they're venturing to nearby Kafiristanmodern-day Afghanistanto depose a weak ruler and establish themselves as kings.

With a cache of the best rifles and knowledge of Masonic rituals that will baffle the native tribesmen, Daniel and Peachey don't see how they can fail.

But they may have underestimated the locals ... Inspired by tales of real-life explorers, Rudyard Kipling wrote The Man Who Would Be King when he was only twenty-two years old.

Featuring vivid prose, exotic settings, and unforgettable characters, this dissection of the heroic pretensions of imperialism and colonialism is a swashbuckling tale for the ages, and served as inspiration for the 1975 John Huston film starring Sean Connery and Michael Caine.