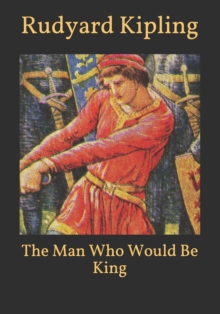 The Law, as quoted, lays down a fair conduct of life, and one not easy to follow.

I have been fellowto a beggar again and again under circumstances which prevented either of us finding out whetherthe other was worthy.

I have still to be brother to a Prince, though I once came near to kinship withwhat might have been a veritable King and was promised the reversion of a Kingdom - army, lawcourts, revenue and policy all complete.

But, to-day, I greatly fear that my King is dead, and if I wanta crown I must go and hunt it for myself.The beginning of everything was in a railway train upon the road to Mhow from Ajmir.

There hadbeen a deficit in the Budget, which necessitated travelling, not Second-class, which is only half asdear as First-class, but by Intermediate, which is very awful indeed.

There are no cushions in theIntermediate class, and the population are either Intermediate, which is Eurasian, or native, whichfor a long night journey is nasty; or Loafer, which is amusing though intoxicated.

Intermediates donot patronize refreshment-rooms. They carry their food in bundles and pots, and buy sweets fromthe native sweetmeat-sellers, and drink the roadside water.

That is why in the hot weatherIntermediates are taken out of the carriages dead, and in all weathers are most properly looked downupon.