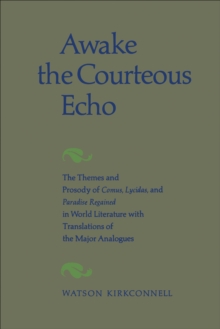 Awake the Courteous Echo: The Themes Prosody of Comus, Lycidas, and Paradise Regained in World Literature with Translations of the Major Analogues

Part of the Heritage series

This Miltonic reference works is the third and final volume in a trilogy dealing with Miltonic analogues.

It complements the author's previous compendia of analogues, The Celestial Cycle (on Paradise Lost) and That Invincible Samson (on Samson Agonistes).Thirty-seven years of research in the libraries of the world have unearthed on impressive array of analogues of Comus, Lycidas, and Paradise Regained; and the more important of these are now made available in Kirkconnell's English translation in Awake the Courteous Echo.

The book includes 39 analogues of Comus, 102 of Lycidas, and 25 of Paradise Regained.

These analogues range from the Sumerian Epic of Gilgamesh to those of Milton's contemporaries.

Dr. Kirkconnell's initial concern is not with source hunting, but with analogues as analogues, the Jonsonian masque, the pastoral elegy, and the brief epic.

The subtlety, complexity, and powerful originality of Milton's art are here for the reader to enjoy.The major analogues in languages other than English are translated in both verse and prose.

Both specialists and students of Milton will find this a fascinating and valuable study.