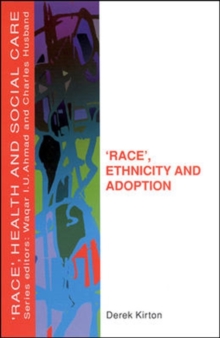 Part of the 'Race', health and social care series

"This important study provides a unique and comprehensive analysis of research into the development of adoption policy and practice regarding black and minority ethnic children in the care of local authorities...I found this book intellectually stimulating and often provocative - it does not make comfortable reading but in the final analysis the case for retaining a commitment to placing children in families which reflect their ethnicity is strongly made." - Felicity Collier, the Director of British Agencies for Adoption and Fostering.

What are the needs of adopted minority ethnic children?

To what extent can white families meet these needs? Should the emphasis on ethnic matching of children and families in adoption be relaxed?

This book reviews the long running and often fierce controversy surrounding the adoption of black and minority ethnic children, either trans racially into white families or into matched 'same race' placements.Through analysis of research and the writings of protagonists, the core concepts - namely the nature and salience of racial/ethnic identity, cultural heritage and dealing with racism - are explored and located within broader debates on 'race' and the family.

The history of the controversy is set out in terms of the competing paradigms offered by liberalism and black radicalism, and more recent 'post-structuralist' influences.

The author argues the need to see adoption (and especially that of black children) as inherently political and contested.

While broadly supporting the case for 'same race' adoption, it is suggested that this must rest on acknowledgment of, and engagement with, social and psychological complexities, rather than their suppression beneath doctrinaire formulas. "'Race', Ethnicity and Adoption" sets the issues in the wider context of a multiracial society and its politics, and will be of particular interest to social workers and child care professionals, but will also appeal more widely to students of sociology, and social and public policy.