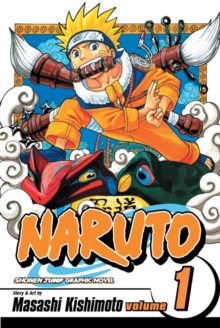 The tests of the ninja

Part of the Naruto series

Naruto is a ninja-in-training with a need for attention, a knack for mischief, and sealed within him, a strange, formidable power.

His antics amuse his instructor Kakashi and irritate his teammates, intense Sasuki and witty Sakura, but Naruto is serious about becoming the greatest ninja in the village of Konohagakure!

In another world, ninja are the ultimate power - and in the village of Konohagakure live the stealthiest ninja in the world.

But twelve years ago Konohagakure was attacked by a fearsome threat - a nine-tailed fox demon which claims the life of the Hokage, the village champion.

Today, peace has returned, and a troublemaking orphan named Uzumaki Naruto is struggling to graduate from the Ninja Academy.

His goal: to become the next Hokage. But unknown to Naruto and his classmates, within him is a terrifying force...