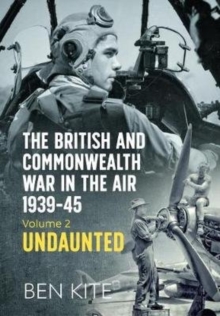 This book provides a comprehensive explanation of the British Commonwealth's war in the air during the Second World War.

It combines detailed studies into the tactics, techniques and technology, together with the personal accounts of the aircrew themselves, as they executed some of the most hazardous operations of the war.

The first volume 'Through Adversity' covered how the British achieved air superiority, conducted bomber operations and supported maritime operations. Undaunted is the second and final volume of the series.

It begins by explaining how Air Intelligence functioned and how the British used signals intelligence, interrogation and air photographic reconnaissance to develop a sophisticated understanding of the enemy.

It continues by investigating the work of the Special Duties squadrons, explaining how they maintained contact and supported resistance and intelligence organisations in occupied countries in Europe and the Far East.

The second volume's major focus is on the support provided to Ground Forces, relating the compelling story of how a disaster in France in 1940, forced a conceptual and organisational re-design of how Britain executed ground support operations.

This pioneering work began in the Western Desert, reached maturity in Italy and was then used with devastating effect in NW Europe and the Far East. 'Undaunted' also covers the role British Commonwealth Air Forces played in air transportation.

Examining the techniques of parachute and glider borne operations in Europe, as well as the decisive part air transport played in the Far East, particularly Burma where it became a hallmark of the Fourteenth Army's operational design. Like its predecessor, Undaunted continues to balance explanations of the tactics, techniques and equipment used by the British with veteran's anecdotes, which bring the human dimension of the air war to life.

The final four chapters in particular cover the experiences of the 'Guinea Pigs' burns victims, airmen downed in the sea, those escaping and evading and most poignantly of all the Prisoner of War Experience. Undaunted reflects the global and cosmopolitan nature of the British Commonwealth's wartime operations.

It includes exciting and thought-provoking accounts from not only RAF personnel, but also those of the RAAF, RNZAF, RCAF, SAAF, The Fleet Air Arm, as well as Poles, Frenchmen and other personnel from occupied countries. It is exceptionally well Illustrated with over 150 photographs and diagrams, many never published before, as well as over 15 maps and diagrams.

The book will undoubtedly appeal not only to aficionados, who will find considerable new information and insights on some of the rarer aspects of the air war, but also the more general reader who will appreciate it as the most comprehensive explanation on Britain's war in the air to date.