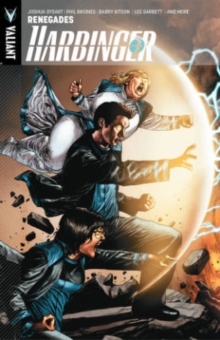 Part of the Harbinger ; 2 series

Led by omega-powered psionic Toyo Harada, the Harbinger Foundation is asecret organization that has controlled and subverted the course of recenthistory.

With a secret army of psychic soldiers at his command, no one has dareddefy Toyo Harada's plans for the human race - until now!

With a classified list of Harada's next recruits in hand, itfalls to Peter to draft the next generation of empowered youth and form thefrontline in humanity's resistance to the Harbinger Foundation.

Peter. Kris. Zephyr. Flamingo. Torque. Their fight for the future comes out of the shadowsand into the Valiant Universe when "Renegades" begins. Collecting HARBINGER #6-10 by New York Times best-selling author JoshuaDysart and an all-star cast of comics' top artistic talents, get ready for thesecond stunning volume of the series Ain't It Cool News calls "simplyastonishing.