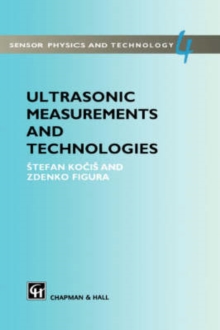 Part of the Sensor physics and technology series ; 1 series

An impulse for writing this book has originated from the effort to sum marize and publicise the acquired results of a research team at the De partment of Automation of the Faculty of Electrical Engineering and In formatics, Slovak Technical University in Bratislava.

The research team has been involved for a long time with control problems for machine production mechanisms and, in recent (approximately 15) years, its effort was aimed mostly at the control of electrical servosystems of robots.

Within this scope, the members of the authors' staff solved the State Re search Task Ultrasonic sensing of the position of a robot hand, which was coordinated by the Institute of Technical Cybernetics of the Slovak Academy of Sciences in Bratislava.

The problem was solved in a complex way, i.e. from a conceptual de sign of the measurement, through the measurement and evaluation sys tem, up to connection to the control system of a robot.

Compensation of the atmospheric influence on the precision of measurement, as well as on the electroacoustical transducers, were important parts of the solution.

The solution was aimed at using the ultrasonic pulse method which en ables the measurement of absolute 3D position coordinates, contrary to the relative position measurements by the incremental pick-ups which are standard robotic equipment.