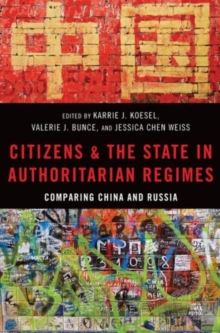 Citizens and the state in authoritarian regimes : comparing China and Russia

The revival of authoritarianism is one of the most important forces reshaping world politics today.

However, not all authoritarians are the same. To examine both resurgence and variation in authoritarian rule, Karrie J.

The essays in Citizens and the State in Authoritarian Regimes focus onthree issues that currently animate debates about these two countries and, more generally, authoritarian political systems.

First, how do authoritarian regimes differ from one another, and how do these differences affect regime-society relations?

Second, what do citizens think about the authoritarian governmentsthat rule them, and what do they want from their governments?

Third, what strategies do authoritarian leaders use to keep citizens and public officials in line and how successful are those strategies in sustaining both the regime and the leader's hold on power?

Integrating the most important findings from a now-immense body of research into a coherent comparative analysis of Russia and China, this book will be essential for anyone studying the foundations of contemporaryauthoritarianism.