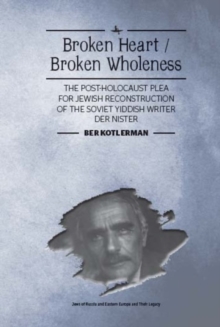 In the summer of 1947, three years before his death in a labor camp hospital, one of the most significant Soviet Yiddish writers Der Nister (Pinkhas Kahanovitsh, 1884-1950) made a trip from Moscow to Birobidzhan, the Jewish Autonomous Region in the Russian Far East.

He traveled there on a special migrant train, together with a thousand Holocaust survivors.

The present study examines this journey as an original protest against the conformism of the majority of Soviet Jewish activists.

In his travel notes, Der Nister described the train as the ""modern Noah's ark,"" heading ""to put an end to the historical silliness"".

This rhetoric paraphrasing Nietzsche's ""historical sickness"", challenged the Jewish history in the Diaspora, which broke the people's mythical wholeness.

Without their own territory, he wrote, the Jews were like ""a soul without a body or a body without a soul, and in either case, always a cripple"".

Records of the fabricated investigation case against the anti-Soviet nationalist grouping in Birobidzhan reveal details about Der Nister's thoughts and real acts.

Both the records and the manifesto are being published here for the first time.