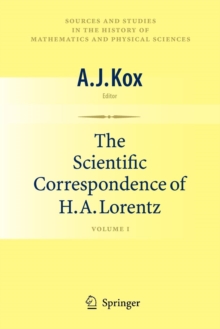 The Scientific Correspondence of H.A. Lorentz : Volume I

This volume presents a selection of 434 letters from and to the Dutch physicist and Nobel Prize winner Hendrik Antoon Lorentz (1853-1928), covering the period from 1883 until a few months before his death in February 1928.

The sheer size of the available correspondence (approximately 6000 letters from and to Lorentz) preclude a full publication.

The letters included in this volume have been selected according to various criteria, the most important of which is scientific importance.

A second criterion has been the availability of letters both from and to Lorentz, so that the reader can follow the exchange between Lorentz and his correspondent.

Within such correspondences a few unimportant items, dealing with routine administrative or organizational matters, have been omitted.

An exception to the scientific criterion is the exchange of letters between Lorentz and Albert Einstein, Max Planck, Woldemar Voigt, and Wilhelm Wien during World War I: these letters have been included because they shed important light on the disruption of the scientific relations during the war and on the political views of these correspondents as well as of Lorentz. similar reasons the letters exchanged with Einstein and Planck on post-war political issues have been included.

Biographical sketch Hendrik Antoon Lorentz was born on July 18, 1853 in the Dutch town of Arnhem.

He was the son of a relatively well-to-do owner of a nursery.