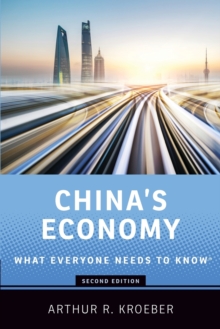 China's economic growth has been revolutionary, and is the foundation of its increasingly prominent role in world affairs.

It is the world's second biggest economy, the largest manufacturing and trading nation, the consumer of half the world's steel and coal, the biggest source of international tourists, and one of the most influential investors in developing countries from southeast Asia to Africa to Latin America.

Multinational companies make billions of dollars inprofits in China each year, while traders around the world shudder at every gyration of the country's unruly stock markets.

Perhaps paradoxically, its capitalist economy is governed by an authoritarian Communist Party that shows no sign of loosening its grip. China is frequently in the news, whether because of trade disputes, the challenges of its Belt and Road initiative for global infrastructure, or its increasing military strength.

China's political and technological challenges, created by a country whose political system and values differ dramatically from most of the other major world economies, creates uncertainty and even fear. China's Economy: What Everyone Needs to Know is a concise introduction to the most astonishing economic and political story of the last three decades.

Arthur Kroeber enhances our understanding of China's changes and their implications.

Among the essential questions he answers are: How did China grow so fast for so long?

Can it keep growing and still solve its problems of environmental damage, fast-rising debt and rampant corruption?

How long can its vibrant economy co-exist with therepressive one-party state?

How do China's changes affect the rest of the world?

This thoroughly revised and updated second edition includes a comprehensive discussion of the origins and development of the US-China strategic rivalry, including Trump's trade war and the race for technological supremacy.

It also explores the recent changes in China's political system, reflecting Xi Jinping's emergence as the most powerful leader since Mao Zedong.

It includes insights on changes in China's financial sector, covering the rise and fall of the shadow banking sector, and China'sincreasing integration with global financial markets. And it covers China's rapid technological development and the rise of its global Internet champions such as Alibaba and Tencent.