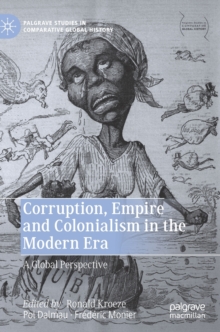 Corruption, empire and colonialism in the modern era : a global perspective

Part of the Palgrave Studies in Comparative Global History series

Answering the calls made to overcome methodological nationalism, this volume is the first examination of the links between corruption and imperial rule in the modern world.

It does so through a set of original studies that examine the multi-layered nature of corruption in four different empires (Great Britain, Spain, the Netherlands and France) and their possessions in Asia, the Caribbean, Latin America and Africa.

It offers a key read for scholars interested in the fields of corruption, colonialism/empire and global history. The chapters 'Introduction: Corruption, Empire and Colonialism in the Modern Era: Towards a Global Perspective', '"Corrupt and rapacious": Colonial Spanish-American past through the eyes of early nineteenth century contemporaries.

A contribution from the history of emotions', and 'Colonial Normativity?

Corruption in the Dutch-Indonesian Relationship in the Nineteenth and Early-Twentieth Centuries' are Open Access under a CC BY 4.0 license at link.springer.com.