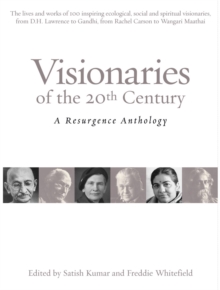 Visionaries of the 20th century : a Resurgence anthology

Part of the Resurgence Anthologies series

"Visionaries of the 20th Century" brings together the lives and works of 100 great men and women who offered inspiration, hope and healing.

The 20th century was marked by wars, dictatorships and environmental destruction, yet many individuals kept alive the hope of a sane and sustainable future through their example, ideas and vision.

Their influence helped to bring colonialism and imperialism, apartheid and authoritarian regimes to an end.