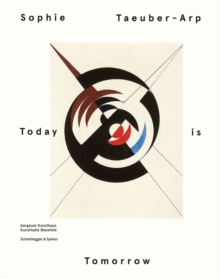 Sophie Taeuber ranks among the pioneers of classical avant-garde in the first half of the 20th century.

Born 1889 in Switzerland and educated in St. Gallen, Switzerland, at Wilhelm von Debschitz's teaching and experimental workshop in Munich and the School of Applied Arts in Hamburg.

She returned to Switzerland in 1915 to study at Rudolf von Laban's dance school in Zurich, where she became involved in the Dada-movement and also taught textile design 1916-29.

From 1928, Taeuber lived and worked in her studio home in Meudon near Paris until she had to flee from German occupation to the south of France and again in 1942 to Zurich, where she died in January 1943. Richly illustrated, this comprehensive new monograph on Sophie Taeuber can for the first time draw on many private collections, presenting an abundance of works previously unpublished or kept from public display for decades.

It documents Taeuber's entire range of creativity and her mastery of material, shape, and colour, her inventiveness and her interdisciplinary thinking and approach. It shows her remarkable versatility in an oeuvre covering all disciplines of the modernist movement: applied and fine art, dance, architecture, interior design and teaching.