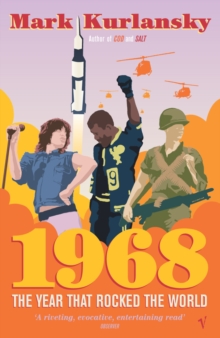 It was the year of sex and drugs and rock and roll.

It was also the year of the Martin Luther King and Bobby Kennedy assassinations, the Chicago Convention, The Tet Offensive, the French student rebellion, Civil Rights, the generation gap, the birth of the Women's movement and the beginning of the end for the Soviet Union.

In 1968, Mark Kurlansky has recorded the cultural and political history of a world changing year in which television's influence on global events first became apparent and spontaneous uprisings occurred simultaneously all around the world.

The year 1968 encompasses the diverse realms of youth and music, politics and war, economics and the media.

This book shows us how one restless, volatile year has helped shape us into who we are today.