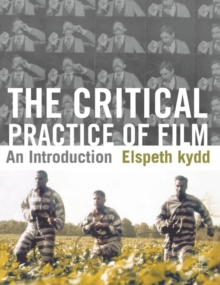 The critical practice of film : an introduction

The Critical Practice of Film introduces film studies and production through the integration of criticism, theory and practice.

Its approach is that of critical practice, a process that explores the integration and intersection between the critical analysis of films and the practical aspects of filmmaking.

In other words, this book is both an introduction to the ways in which we watch films, as well as an introduction to how films are created ? the more you know about how films are made, the more you can appreciate the artistry involved in a film. Author Elspeth kydd combines explorations of basic technical and aesthetic principles with extended analyses drawn from both classic and contemporary Hollywood and other world cinemas, including Battleship Potemkin (1927), Un Chien andalou (1929), Stagecoach (1939), Mildred Pierce (1945), Notorious (1946), Letter from an Unknown Woman (1948), Gentlemen Prefer Blondes (1953), Breathless (1959), Memories of Underdevelopment (1968), Star Wars (1977), Raiders of the Lost Ark (1981), Distant Voices, Still Lives (1988), The Matrix (1999), Amores Perros (2000), Gosford Park (2001) and The Lord of the Rings trilogy (2001-3).

Also included is a range of exercises designed to stimulate critical and analytical thought and help to demystify the process of creative mediamaking.

Assignments range in scale from simple storyboarding and narrative development exercises that may be explored with minimal technology, to more complex video projects that can be adapted to suit varying levels of technical skill.

The Critical Practice of Film provides an accessible introduction to the theory and practice of film studies, integrating creative practice with critical and theoretical engagement to guide students towards an engaged form of creative expression and an active role as reviewer and critic.

Beautifully presented, this ground-breaking text offers all students an integrated understanding of film criticism and production. Elspeth kydd is a Senior Lecturer in Film Studies and Video Production at the University of the West of England.

She has taught, researched and published in film and television studies for nearly twenty years, as well as being an active documentary videomaker.

This book developed from teaching integrated theory-practice film courses at universities in the US and UK.