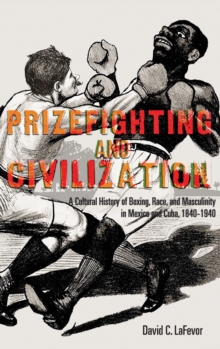 Prizefighting and Civilization : A Cultural History of Boxing, Race, and Masculinity in Mexico and Cuba, 1840-1940

In Prizefighting and Civilization: A Cultural History of Boxing, Race, and Masculinity in Mexico and Cuba, 1840-1940, historian David C.

LaFevor traces the history of pugilism in Mexico and Cuba from its controversial beginnings in the mid-nineteenth century through its exponential rise in popularity during the early twentieth century.

A divisive subculture that was both a profitable blood sport and a contentious public spectacle, boxing provides a unique vantage point from which LaFevor examines the deeper historical evolution of national identity, everyday normative concepts of masculinity and race, and an expanding and democratizing public sphere in both Mexico and Cuba, the United States' closest Latin American neighbors.

Prizefighting and Civilization explores the processes by which boxing--once considered an outlandish purveyor of low culture--evolved into a nationalized pillar of popular culture, a point of pride that transcends gender, race, and class.