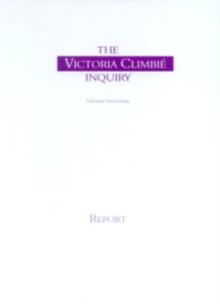 The Victoria Climbiâe inquiry : report of an inquiry

By: Laming, Lord,  The Stationery Office

Part of the Command Paper series

This is the official report of the independent inquiry into the events leading up to the death of Victoria Climbie, an eight-year-old child who died in hospital in February 2000 of injuries sustained after months of abuse.

The report by Lord Laming finds that the death represents a gross failure of the system of public agencies involved to protect vulnerable children from deliberate harm, and this failure is primarily due to "widespread organizational malaise".

The agencies involved were under-funded, inadequately staffed and often showed a lack of even basic good practice.

However, the key issue is one of lack of leadership and accountability shown by senior level management of the agencies involved, rather than just a structural or staffing problem.

The legislative framework for child protection is judged to be basically sound; the problem lies more with its implementation. The report contains 108 recommendations for fundamental changes to the way social care, healthcare and police child protection services are organized and managed at national and local level, in order to establish a clear line of accountability in the provision of services for vulnerable children and the support of families.

The recommendations include: the creation of a Children and Families Board within the government, to be chaired by a minister of Cabinet rank and to include representatives from other government departments; the creation of a National Agency for Children and Families, with responsibility to advise the Board on policies that affect the well-being of children and families, and the discretion to conduct serious case reviews; and the creation of a Management Board and a Committee at local authority level, involving senior management representatives; and other recommendations, which relate to improvements in the exchange of information within and between agencies: the feasibility of a national children's database to record any contact a child has with any key protection service, service funding issues, staff training and supervision. A CD-ROM about the death of Victoria Climbie in February 2000 is included.