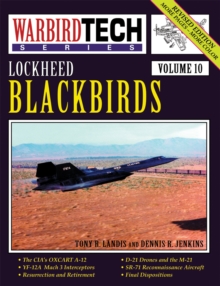 On 26 April 1962, Lockheed test pilot Lou Schalk took the first flight in an aircraft at a classified desert test facility in Nevada.

The aircraft was far more advanced than anything in the sky, and when made public several years later it would capture the world's fascination like few other aircraft ever have.

Three distinct variants were eventually manufactured, but surprisingly, none of them ever had an official name.

Unofficially, they have all been referred to as "Blackbirds" and "Habu," the fastest, highest flying air-breathing aircraft in the world.

The Lockheed model number of the first variant was A-12, but by a sort of inspired perversity it came to be called Oxcart, a code name also applied to the program under which it was developed.

The other two variants carried the Air Force designations YF-12 and SR-71.

This is the story of the Lockheed Blackbirds - fifty of the fastest, highest-flying air-breathing aircraft ever developed and deployed.

This book is crammed with detailed photos and illustrations and is a fantastic resource for scale model builders.