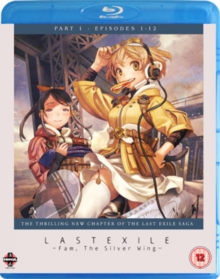 The Turan Kingdom are set to return to Earth, having previously fled when it was all but destroyed, while Ades, being the only nation to remain on the planet, are determined to prevent any immigrants from settling on their lands.

When Liliana is captured the situation soon escalates out of control and it falls to Fam Fan Fan (Aki Toyosaki), Giselle Collette (Aoi Yuuki) and their fellow Sky Pirates to watch over Millia and help her to regain control of her kingdom.