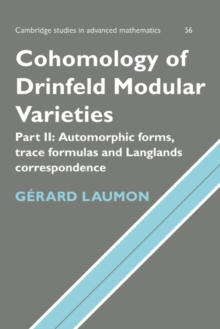 Part of the Cambridge Studies in Advanced Mathematics series

Cohomology of Drinfeld Modular Varieties provides an introduction, in two volumes, both to this subject and to the Langlands correspondence for function fields.

These varieties are the analogues for function fields of the Shimura varieties over number fields.

The Langlands correspondence is a conjectured link between automorphic forms and Galois representations over a global field.

By analogy with the number-theoretic case, one expects to establish the conjecture for function fields by studying the cohomology of Drinfeld modular varieties, which has been done by Drinfeld himself for the rank two case.

This second volume is concerned with the Arthur-Selberg trace formula, and with the proof in some cases of the Rmamanujan-Petersson conjecture and the global Langlands conjecture for function fields.

It is based on graduate courses taught by the author, who uses techniques which are extensions of those used to study Shimura varieties.

Though the author considers only the simpler case of function rather than number fields, many important features of the number field case can be illustrated.

Several appendices on background material keep the work reasonably self-contained. It is the first book on this subject and will be of much interest to all researchers in algebraic number theory and representation theory.