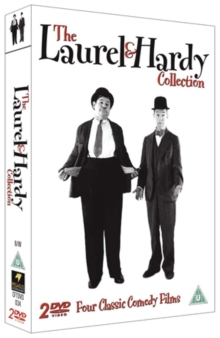 The Laurel and Hardy Collection

In 'March of the Wooden Soldiers' (1934) the duo inhabit the fantastic Mother Goose-based Toyland as employees of Santa Claus.

Thanks to their bumbling but good-hearted efforts, Bo-Peep (Charlotte Henry) is saved from a disastrous marriage, her true love is spared exile and the evil Barnaby (Henry Kleinbach) is banished forever.

In 'The Flying Deuces' (1939) Stan and Ollie are enjoying a Parisian holiday when the latter falls for Georgette (Jean Parker), unaware that she is already married.

When she spurns his advances, Ollie joins the Foreign Legion 'to forget', with Stan in tow.

The pair do not make the best of soldiers, however, and are shocked to discover that they cannot simply leave the army when they feel like it! 'Utopia', (1950) Laurel and Hardy's last film together, sees them inherit an island in the South Pacific.

Unfortunately, their paradise is threatened by crooks who are after its rich source of uranium.

Finally, in 'Bogus Bandits' (1933) Olio and Stanlio are the servants of Fra Diavoli (Dennis King), a bandit who is in reality the Marquis de San Marco.

As the Marquis he discovers the whereabouts of high society ladies' jewellery, only to steal the valuables in his bandit guise.