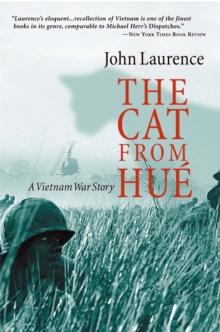 The cat from Huâe : a Vietnam war story

"Formidable, gripping and always informative...Laurence's eloquent, at times acerbic recollection of Vietnam is one of the finest books in its genre, comparable to Michael Herr's Dispatches." --The New York Times Book Review.

John Laurence covered the Vietnam war for CBS News from 1965 to 1970 and was judged by his colleagues to be the best television reporter of the war.

His documentary about a squad of U.S. troops, "The World of Charlie Company," received every major award for broadcast journalism.

Despite the professional acclaim, however, the traumatic stories Laurence covered became a personal burden that he carried long after the war was over.In this evocative, unflinching memoir, laced with humor, anger, love, and the unforgettable story of Mo, the Vietnamese cat, Laurence recalls coming of age during the war years as a journalist and as a man.

Along the way, he clarifies the murky history of the war and the role that journalists played in altering its course.

The Cat from Hu has earned passionate acclaim from many of the most renowned journalists and writers about the war, as well as from military officers and war veterans, book reviewers, and readers. Now available in trade paperback with a new epilogue, this book will stand with Michael Herr's Dispatches , Philip Caputo's A Rumor of War , and Neil Sheehan's A Bright, Shining Lie as one of the best books ever written about Vietnam-and about war generally.