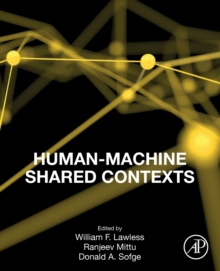 Editors and authors debate whether machines, humans, and systems should speak only to each other, only to humans, or to both and how.

The book establishes the meaning and operation of "shared contexts" between humans and machines; it also explores how human-machine systems affect targeted audiences (researchers, machines, robots, users) and society, as well as future ecosystems composed of humans and machines. This book explores how user interventions may improve the context for autonomous machines operating in unfamiliar environments or when experiencing unanticipated events; how autonomous machines can be taught to explain contexts by reasoning, inferences, or causality, and decisions to humans relying on intuition; and for mutual context, how these machines may interdependently affect human awareness, teams and society, and how these "machines" may be affected in turn.

In short, can context be mutually constructed and shared between machines and humans?

The editors are interested in whether shared context follows when machines begin to think, or, like humans, develop subjective states that allow them to monitor and report on their interpretations of reality, forcing scientists to rethink the general model of human social behavior.

If dependence on machine learning continues or grows, the public will also be interested in what happens to context shared by users, teams of humans and machines, or society when these machines malfunction.