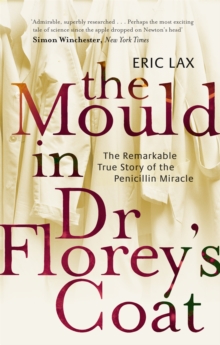 The mould in Dr Florey's coat : the remarkable true story of the penicillin miracle

Many people know that in 1928 Alexander Fleming discovered penicillin's antibiotic potential while examining a stray mould that had bloomed in a dish of bacteria in his London laboratory.

But few realise that Fleming worked only fitfully on penicillin until 1935, and that he is merely one character in the remarkable story of the antibiotic's development as a drug.

The others are Howard Florey, Professor of Pathology at Oxford University, where he ran the Dunn School; the German Jewish emigre and biochemist Ernst Chain; and Norman Heatley, one of the few scientists in Britain capable of the micro-analysis of organic substances.

It was these three men and their colleagues at the Dunn School who would battle a lack of money, a lack of resources and even each other to develop a drug that would change the world.

It was these three men and their colleagues who would be almost forgotten.

Why this happened, why it took fourteen years to develop penicillin, and how it was finally done, is a story of quirky individuals, missed opportunities, medical prejudice, brilliant science, shoestring research, wartime pressures and misplaced modesty.