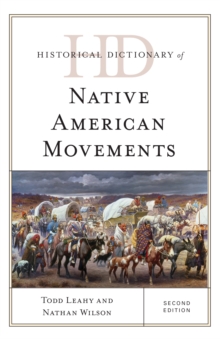 Part of the Historical Dictionaries of Religions, Philosophies, and Movements Series series

Native Americans in the United States, similar to other indigenous people, created political, economic, and social movements to meet and adjust to major changes that impacted their cultures.

For centuries, Native Americans dealt with the onslaught of non-Indian land claims, the appropriation of their homelands, and the destruction of their ways of life.

Through various movements, Native Americans accepted, rejected, or accommodated themselves to the nontraditional worldviews of the colonizers and their policies.

The Historical Dictionary of Native American Movements is designed to provide a useful reference for students and scholars to consult on topics dealing with key movements, organizations, leadership strategies, and the major issues these groups confronted. This second edition of Historical Dictionary of Native American Movements contains a chronology, an introduction, appendixes, and an extensive bibliography.

The dictionary section has over 200 cross-referenced entries on important personalities, language, religion, politics, and the environment.