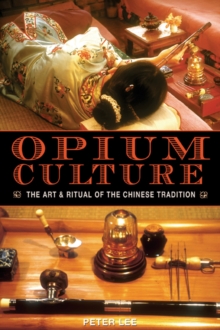 Opium Culture : The Art and Ritual of the Chinese Tradition

A detailed study of the history and usage of opium.

Opium. The very sound of the word conjures images of secret rooms in exotic lands, where languid smokers lounge dreamily in a blue haze of fragrant poppy smoke, inhaling from long bamboo pipes held over the ruby flame of the jade lamp.

Yet today very little accurate information is available regarding a substance that for 300 years was central to the lives of millions of people throughout the world.

In "Opium Culture", Peter Lee presents a fascinating narrative that covers every aspect of the art and craft of opium use.

Starting with a concise account of opium's long and colourful history and the story of how it came to be smoked for pleasure in China, Lee offers detailed descriptions of the growing and harvesting process; the exotic inventory of tools and paraphernalia required to smoke opium as the Chinese did; its transitions from a major herb to a narcotic that has been suppressed by the modern; and art, culture, philosophy, pharmacology and psychology of this longstanding Asian custom. Highlighted throughout with interesting quotes from literary and artistic figures who were opium smokers, such as Jean Cocteau, Pablo Picasso, Herman Melville and Samuel Taylor Coleridge, the text is studded with gems of long forgotten opium arcane and dispels many of the persistent myths and opium and its users.