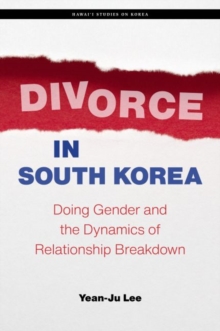 Divorce in South Korea : Doing Gender and the Dynamics of Relationship Breakdown

Part of the Hawai'i studies on Korea series

It may sound logical that individualistic attitudes boost divorce.

This book argues otherwise. Conservative norms of specialized gender roles serve as the root cause of marital dissolution.

Those expectations that prescribe what men should do and what women should do help break down marital relationships.

Data from South Korea suggest that lingering norms of gendered roles can threaten married persons' self-identity and hence their marriages during the period of rapid structural changes. The existing literature predicting divorce does not conceptually distinguish between the process of relationship breakdown and the act of ending a marriage, implicitly but heavily focusing on the latter while obscuring the former.

In contemporary societies, however, the social and economic cost of divorce is sufficiently low, i.e., stigma against divorce is minimal and economic survival after divorce is a nonissue, and leaving a marriage is no longer dictated by one's being liberal or conservative or any particular characteristics.

Thus, the right question to ask is not who leaves a marriage but why a marriage goes sour to begin with.

Practically no previous study on divorce has exclusively theorized the process of relationship breakdown.

Not conceptually separating the act of leaving a marriage, previous studies addressing the risk factors of divorce have been rather ambiguous about how marital relationships deteriorate enough to result in dissolution.

In Korea, a majority of divorces occur through mutual consent of the two spouses without any court procedure, but when one spouse files for divorce, the fault-based divorce litigation rules require the court to lay out the entire chronicle of relevant events occurring up to the legal action, often with the help of court investigators.

As such, court rulings provide glimpses into the entire marital dynamics, including verbatim exchanges between the spouses.

Lee argues that the typical process of relationship breakdown is related to married persons' daily practices of verifying their gendered role identity.