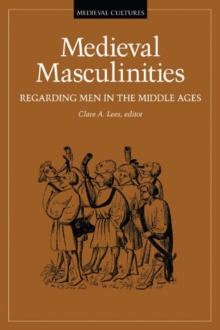 Medieval Masculinities : Regarding Men in the Middle Ages

Part of the Medieval Cultures series

Since the mid-1970s men's studies, and gender studies has earned its place in scholarship.

What's often missing from such studies, however, is the insight that the concept of gender in general, and that of masculinity in particular, can be understood only in relation to individual societies, examined at specific historical and cultural moments.

An application of this insight, "Medieval Masculinities" is the first full-length collection to explore the issues of men's studies and contemporary theories of gender within the context of the Middle Ages.

Interdisciplinary and multicultural, the essays range from matrimony in medieval Italy to bachelorhood in "Renaissance Venice", from friars and saints to the male animal in the fables of Marie de France, from manhood in "Sir Gawain and the Green Knight", "Beowulf" and the "Roman d'Eneas" to men as "other", whether Muslim or Jew, in medieval Castilian Epic and Ballad. The authors are especially concerned with cultural manifestations of masculinity that transcend this particular historical period - idealized gender roles, political and economic factors in structuring social institutions, and the impact of masculinist ideology in fostering and maintaining power.

Together, these essays constitute an important reassessment of traditional assumptions within medieval studies, as well as a major contribution to the evolving study of gender.