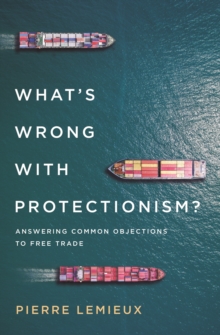 Putting tariffs on imported goods or setting other barriers to international trade can be tempting for politicians.

They assume that many of their constituents believe that free trade is not fair trade and that other countries aren't playing by the rules.

This belief makes it easy for industry leaders to demand protection for their businesses and their workers-to "put America first."But Americans should resist the siren calls of protectionism.

In this highly relevant protectionism primer, Pierre Lemieux shows what can happen if they don't. As the author demonstrates, trade between any two countries is fair for the same reasons as exchange between two individuals: it is to the benefit of both.

Lemieux carefully refutes the arguments of those who would curtail Americans' access to the benefits of international commerce-from the claim that we can boost economic growth by reducing imports to the belief that free trade leads to "shipping jobs overseas."Yes, manufacturing jobs are declining in this country and have been since the 1950s.

All parties to a trade benefit. Lemieux shows how free trade improves the lives of American consumers, especially the poor.

The narrow agenda of the protectionists-to protect a small minority of producers at the expense of millions of their fellow Americans-is the wrong path for an increasingly diverse and complex economy.

This concise primer shows you why.