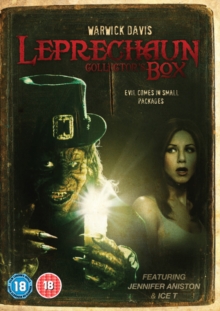 The first five films in the comedy horror series. In 'Leprechaun' (1993), J.D. Reding (John Sanderford) and her daughter Tory (Jennifer Aniston) take a break at a summer house which is unfortunately located on the site of an evil leprechaun's (Warwick Davis) stolen gold, and he will stop at nothing to get it back.

J.D., Tory and local boys Nathan (Ken Olandt), Alex (Robert Hy Gorman) and Ozzie (Mark Holton) team up to prevent the leprechaun's trail of magic and murder as he tries to drive them away from his treasure.

He gets to choose a bride by making her sneeze three times.

Unfortunately the bride he chooses turns out to be the daughter of his slave.

In 'Leprechaun 3' (1995), when college student Scott (John Gatins) gives a beautiful magician's assistant a lift to Las Vegas, he can't resist stopping off at a casino.

Pretty soon he's lost all of his money and, in order to win it back, decides to pawn his Rolex watch.

While at the pawn shop, he finds one of the leprechaun's (Davis) gold shillings and is granted a wish.

Thanks to the lucky coin, Scott goes on a winning streak, but the leprechaun has realised his coin has gone missing and is willing to kill to get it back.

In 'Leprechaun 4' (1996), in his quest to rule the universe, the leprechaun (Davis) takes to outer space, where he kidnaps an alien princess and plans to marry her.

However, when a platoon of space marines are sent to rescue the princess, the leprechaun discovers a sinister half-human, half-computer doctor who wants to use the princess's DNA to restore his body to its former self.

Soon the scene is set for a showdown between the leprechaun, the marines, and a gigantic blood-sucking monster, while their spaceship's timer is counting down to self-destruction.

Finally, in 'Leprechaun 5' (2000), three young rap artists are in need of money to go to Las Vegas and enter a contest.

But when they get caught up in stealing a medallion from a statue, it transforms into the leprechaun (Davis), who goes on a killing spree looking for his missing gold.