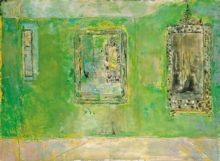 Painter, draftsman and engraver, Pierre Lesieur (1922-2011) was one of the most influential French artists of the second half of the 20th century.

Trained at the Ecole des Beaux-Arts in Paris - where he took lessons from Andre Lhote - and at the Academie de Montmartre, he had his first exhibition in 1952. Lesieur's paintings of the 1950s are characterised by the use of brightly coloured areas, in line with the work of Henri Matisse and Pierre Bonnard.

In the 1960s, this research bordered on abstraction, particularly in still lifes and representations of objects.

From the 1970s onwards, through his paintings and drawings, Lesieur took a particular interest in interiors, as well as in portraits and female nudes. Early in his career, Pierre Lesieur was recognised as an important artist.

After his first personal exhibition in 1952, his work was regularly shown at the Coard Gallery in Paris.

From the 1990s, Lesieur's notoriety became international, resulting in further exhibitions in Japan and the United States.

Some of his works are now housed in major museums such as the Center Pompidou, the Metropolitan Museum of Art and the Hiroshima Museum. Text in English and French.