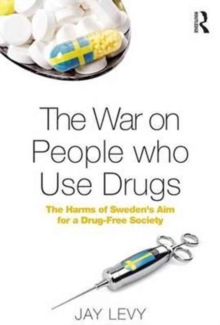 The war on people who use drugs : the harms of Sweden's aim for a drug-free society

This book explores the outcomes of Sweden's aim to create a `drug-free society' on the lived realities, health, and welfare of people who use drugs, and on the dynamics of Swedish drug use.

Drawing on a wealth of empirical data, including extensive interview testimony and participant observation from years of fieldwork conducted in Sweden, the book debunks the widely-believed myth that Sweden is a progressive, liberal, inclusive state.

In contrast to its liberal reputation, Sweden has criminalised the use of drugs and allows for compulsory treatment for those with drug dependencies.

The work argues that Swedish law and policy cannot be demonstrated to have decreased drug use as intended, with the law used instead as a means with which to displace people who use drugs from public spaces in Sweden's cities. And where the law has failed in its ambition to decrease drug use, Swedish law and policy have increased and exacerbated the problems, dangers, and harms that can be associated with it.

People who use drugs in Sweden experience considerable and endemic difficulties with health, violence, abuse, and social exclusion, stigma, and discrimination as a result of Sweden's drug laws, policies, and discourses.