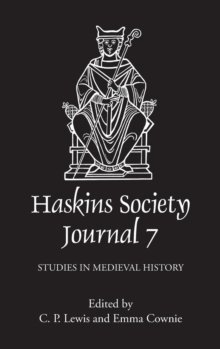 The essays in this volume derive in the main, though not exclusively, from the 13th annual conference held in Houston in November 1994.

Written by an international group of scholars, they centre on the history of England and its neighbours during the Anglo-Saxon, Viking, Anglo-Norman and Angevin periods.

Of particular interest is a wide-ranging and well-illustrated article on medieval bridges; other topics include the Anglo-Norman patrons of Bury St Edmunds, Anglo-Welsh relations before 1066, the legal status of the Britons in seventh-century Wessex, and the Hundred Rolls.

There is also a particular focus on the roles played by women, with articles on Henry I's queen Adeliza of Louvain, and the Anglo-Norman countesses of Chester. Contributors: EMMA COWNIE, NICHOLAS BROOKS, LOUIS M.