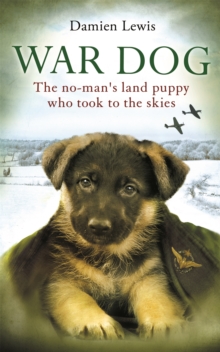 In the winter of 1939 in the cold snow of no-man's-land, two loners met and began an extraordinary journey together, one that would bind them for the rest of their lives.

One was an orphaned puppy, abandoned by his owners as they fled the approaching Nazi forces.

The other, a lost soul of a different sort - a Czech airman, flying for the French Air Force but soon to be bound for the RAF and the country that he would call home.

Airman Robert Bozdech stumbled across the tiny German Shepherd after being shot down during a daring mission over enemy lines.

Unable to desert his charge, he hid the dog inside his flying jacket as he made his escape.

In the months that followed the pair would save each other's lives countless times as they fled France and flew together with Bomber Command; the puppy - which Robert named Ant - becoming the Squadron mascot along the way.

Even then he refused to abandon his duty, waiting patiently beside the runway for his master's return from every sortie. By the end of the war Robert and Ant had become very British war heroes, and Ant was justly awarded the Dickin Medal, the 'Animal VC'.

Thrilling and deeply moving, their story will touch the heart of anyone who understands the bond that exists between one man and his dog.